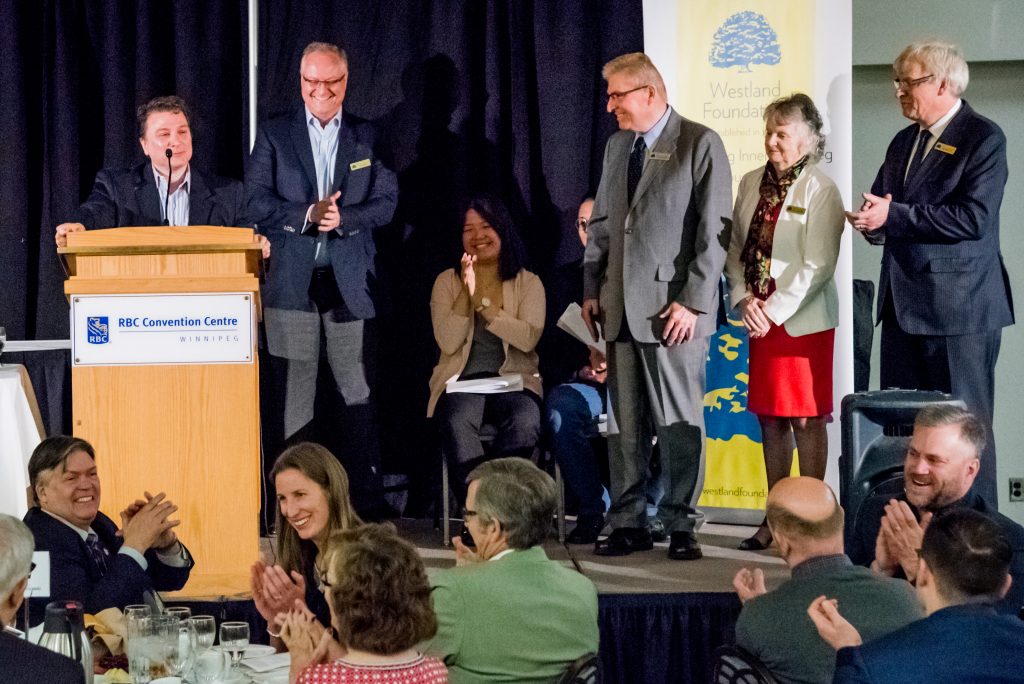 The Westland Foundation honoured its founding directors Allen and Beverly Harasymuk and Walter Silicz, for their outstanding volunteer service of over 25 years. The recognition was given during the Foundation’s fundraising breakfast, which was held at the RBC Convention Centre on May 2, 2018.

Allen, Beverly and Walter have played significant roles in bringing the Foundation to where it is today. Thank you for your outstanding devotion to Westland's mission!

Allen and Beverly Harasymuk have been volunteers and donors since Westland's inception in 1993.

Allen is a Chartered Professional Accountant. He has provided services as treasurer while Beverly has served as the Foundation's vice-president. Their volunteer services have included doing monthly accounting, preparing CRA returns, liaising with auditors and anything that can be done to assist Westland in carrying out its mission. Together they have built Westland's accounting system. They have been instrumental in bringing the Education Fund from $0 to its present amount of over $2 million.

Allen and Beverly have also given back to other community organizations, including to East St. Paul Police, Fire and Emergency Commission for Bev, and the City of Winnipeg Retiree's Association for Allen.

After more than 25 years of dedicated service, Allen and Beverly continue to be invested in assisting students to achieve a post-secondary education through the Westland scholarship.

Walter Silicz has been a Westland volunteer and donor since 1995.

As an investment advisor for over 39 years (now retired), Walter has provided Westland with valuable financial advice, including on the establishment of the Westland Foundation Education Fund (WFEF) and its on-going fund management and endowment campaign.

Walter is an inspiration to the Westland team when it comes to giving. He is always ready to support all of the Foundation's projects financially. He has championed Westland's fundraising events, and he has drawn many donors to the Foundation. For example, Walter facilitated the National Bank Financial's sponsorships of Westland's fundraising breakfast from 2012 to 2016.

With his firm belief that education changes lives, Walter has established The Walter Silicz Foundation. The Walter Silicz Foundation has supported Manitoba-based organizations focusing on education. Besides Westland, the Foundation has supported Diabetes Canada, Friends of the Canadian Museum for Human Rights, St. Boniface Hospital, The United Way of Winnipeg, Winnipeg Folk Festival and the Winnipeg Symphony Orchestra.

Outside Westland, Walter has been a volunteer with the Manitoba Chamber Orchestra's board. He has also helped attract donors to support the Orchestra's annual programming.