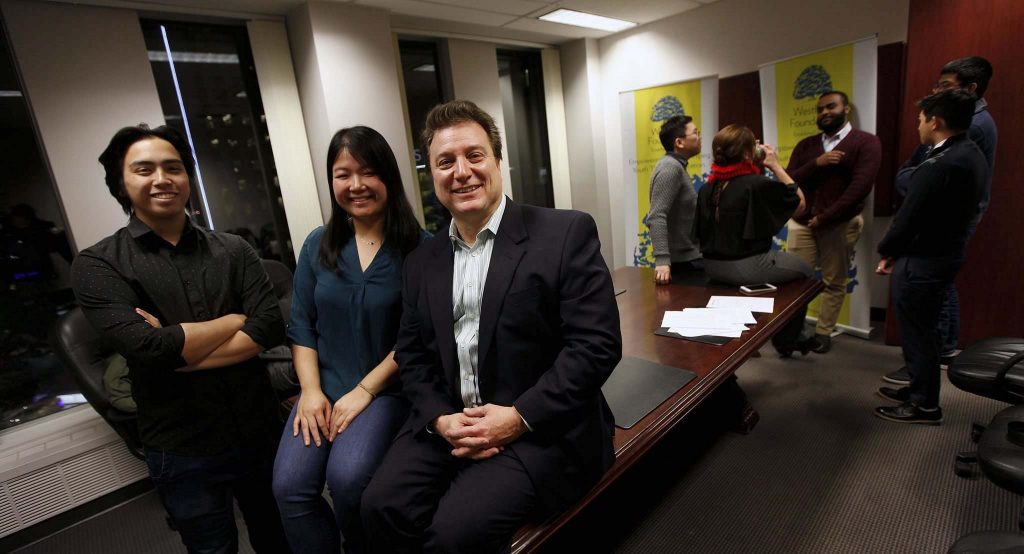 You might have the marks to go to higher education, but you still need the money.

While public elementary, middle and high schools are free for students, that’s not the case with post-secondary education at both universities and colleges. They charge tuition, and it can be expensive.

It can be especially tough if you live in an area where, traditionally, it’s hard for families to find the funding needed to finance up to four years of education.

That’s where the Westland Foundation steps in. The non-profit organization is in its 25th year of helping students from inner-city communities in a portion of the Winnipeg School Division receive scholarships to help alleviate one of the biggest barriers to post-secondary education.

Jessie Asuncion-Reyes, who graduated from Technical Vocational High School in 2017, received $800 when he began his first year in digital media design at Red River College, and another $800 at the beginning of his second year.

“It helped me so much,” Asuncion-Reyes said recently.

“It is hard to pay for school nowadays. I might have had to put off school by a year or two if not for the Westland Foundation. And now I want to give back because they helped me so much.”

John Prystanski, a former North End city councillor who is the foundation’s president, came up with the idea of creating the organization while representing a portion of the area residents it helps.

At first, the foundation raised funds to help summer school recreation programs by holding an event dubbed Carnival. The event’s midway was held in the parking lot of the McPhillips Station Casino, while a 24-team slo-pitch tournament occurred at the nearby former exhibition grounds. The first year, it raised $10,000.

Prystanski wanted the foundation to do more, and he got another idea while attending numerous school graduation ceremonies as the area councillor.

“There is a negative connotation about the area, but that’s not what the area is all about,” he said. “The spark was about just helping all of these kids. How can I make a change in the kids and in the area I live in and represent? I thought: let’s create a scholarship program.”

The foundation now has a total of more than $2 million in endowment funds with its four partners: the University of Manitoba, University of Winnipeg, Red River College and the Winnipeg Foundation.

Named for two of the community centres in the area where two original board members were from — Weston and Brooklands — students begin qualifying for Westland scholarships when they enter Grade 7, through to the end of high school.

The foundation helps students going to schools within the boundaries of Inkster Boulevard to the north, the Assiniboine River to the south, Route 90 on the west, and the Red River to the east.

For every mark of 80 per cent or higher a student earns between Grade 7 and the end of high school, the foundation puts at least $15 in a trust account for them designed to be used to pay for tuition at either the U of M or U of W. If a student plans to go to Red River College, every mark of A or B, or 70 per cent and higher, becomes a credit towards the scholarship.

The foundation estimates about 5,000 of the roughly 9,000 students going to the 49 schools in the boundaries are eligible to receive scholarships.

Prystanski said the foundation handed out its first scholarships in 2009 to three students, and it was a total of $900. “It took us a while to build up an endowment fund,” he said.

This year, the foundation awarded about $100,000 in scholarships to more than 160 students, including past recipients who were in their second year of studies at Red River. The smallest scholarship was $200 and the largest was $1,250.

Prystanski said the foundation’s board of directors have a lofty goal in mind: they hope to someday be able to fund the entire post-secondary tuition fees for all of the area students.

He said if these students can get the education they want, there will be innumerable social and economic spin-offs and benefits through both inner-city neighbourhoods and society in general.

“We will need to have an endowment fund of $55 million,” Prystanski said. “We’re not building a building — we’re building a capital fund. We will raise $55 million — I have no doubt about that.

“We have to because instead of education being something you should go, it has become something you must go. Education changes lives. We want to open that door.”

Allen Harasymuk, and his wife, Beverley, have volunteered as board members with the foundation for more than 25 years (he as treasurer and she as board secretary).

“The long-term goal is to provide scholarships to all eligible students in the area, and my wife and I thought it was great. We feel pretty good about what it has done so far,” he said. “It may sound like not a lot of money, but to these students coming up through tough times, it is a very significant help.”

Duyen Chau graduated from Sisler High School in 2015, and is at the University of Manitoba working towards becoming a respiratory therapist. She received a scholarship of about $1,000.

“The scholarship did help me because I would have had to work more without it,” Chau said.

“It was also good knowing someone out there is giving you motivation and support. I now want to go back and help future scholars as well.”

Prystanski said the foundation will continue raising money to increase the endowment fund.

“Our overall goal is to change Winnipeg for the better. We are doing that.”